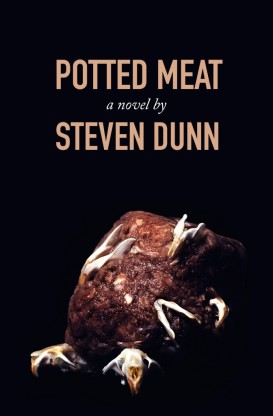 I’ve met Steven Dunn only one time. He was smoking a cigarette outside of the Mercury Cafe after the locally renowned F Bomb Flash Fiction Open Mic. He told me and a group huddled up in the cold how his book had recently been picked up for publication. He spoke humbly about it, but you could see the excitement in his face through it all; the cold, the lights of the Mercury Cafe hanging over us, the cigarette smoke.

The book, published by Tarpaulin Sky Press, is called Potted Meat, a novel in the form of a few dozen short stories, and I can tell you from my weekly recommendations of it to friends, family, strangers on the light rail, anyone willing to listen really, that the title garners some interesting reactions. People have said everything to me from “What the heck is potted meat?” to “Gross…”

The cover art, pictured above, is no less off-putting. It would be sleek and almost sexy if not for the giant chunk of meat with strangeness protruding from it at all angles. In my opinion, Dunn couldn’t have picked a better title and image for his first novel – which is as sentimental as it is jarring.

Through the short episodic pieces in Potted Meat, Dunn establishes a narrative of coming-of-age in West Virginia. One such story is “Happy Little Trees” which Dunn begins:

These short sentences comprise a large part of the novel. Simple, but full of strong, cut-and-dry imagery. Swift, deep punches that minimalist writers like Hemingway would be proud of. Dunn goes on to describe how he pulls in whatever he can from nature, including grasshoppers for green ink, and dandelions for yellow ink, to make up for his lack of paint. Even in the gritty images of a young boy desperate enough for colors that he is eating bugs, we begin to see a picture of what growing up without might have looked like for Dunn. A theme continued in several instances, including the eating of the titular potted meat.

Jumping into the novel, short stories like “Happy Little Trees” might seem random, but it’s a mistake to think that Dunn doesn’t want to leave the reader with a certain sense of confusion. Where the real power in Potted Meat comes into play is when the images that Dunn has written into your memory in permanent ink come back to bite you in the butt. One such example is in “Yellow” where Dunn retells the story of finding his grandmother had died. When asking his mom what happened she says “…she just turned yellow and died.” Dunn, in response, vows “to never eat dandelions again.”

Dunn’s language is the kind of simple that when you’re done with the novel you might think to yourself, “I could have written that,” but the amount of power in the intentionally terse and often child-like language of the book is something that is not so easily filtered from head to paper. Between the short sentences, the anecdotal reprisal of memories and the dark humor hiding beneath Dunn’s matter-of-fact presentation is a true craft and authenticity that can drive any reader to care about the day-to-day plight of a young boy coming of age through all sorts of strange adversity.

I think back to meeting Dunn before ever reading this breakthrough novel. I think about the humble way he took drags from that cigarette, shirking off our excitement of the news of his book finding a publisher. That humility, that quiet genius is what sneaks up on you in each intentional word and each short story, some of which are no longer than a page, between the front and back cover of Potted Meat. Steven Dunn has created something worthwhile that shows a true dedication to capturing the feelings of his childhood and putting them in a small tin can for us to digest, one harsh bite at a time. I guess, in short,

Steven Dunn is on. His writing has paint. Yours don’t. 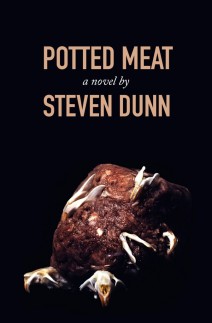